Here is Trump’s latest suggestion about the health care debacle: “If Republican Senators are unable to pass what they are working on now, they should immediately REPEAL, and then REPLACE at a later date!”

And what do you have in mind as that “later date!”?

Many of the replies to the above Tweet were what I would expect. Things like: “They should repeal you.” “Then replace you at a later date.”

That was my particular favorite.

As you can see I loved it!

But then there are people who agree with the Trumpster. Like this guy who said: “We honestly just want it repealed, like we’ve been promised for years” and “Allow companies to sell what they want across state lines, true competition… not what we had pre-Obamacare. That wasn’t true competition…” “We want Obamacare repealed and replaced with the free market. Not captive by all sorts of Congressional horse manure to line their pockets.”

Who is this guy? He says he made himself rich thanks to his God and the U.S. 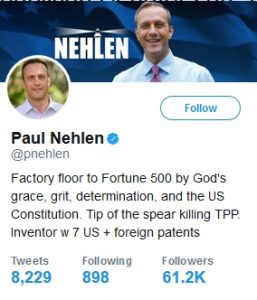 Constitution – oh, yeah, and his own good qualities.

(I am giving you all these illustrations because for some reason lately I have been very committed to telling the truth and to showing you that I am not making this up, but that I have real, actual sources for what I write.)

So, speaking of truth, I have some nits to pick with this Nehlen guy (and Trump, and most of the Republicans in the House and Senate). I will focus on this guy right now because he is perpetuating some of the misinformation (1)  which needs to be debunked for us to make good decisions.

His points seem to be: (A) The federal government should, in order to foster competition, drop controls that prevent insurers from operating across state lines. (B) There should be no governmental insurance programs or regulation of insurance companies – only corporate, free-market insurers. This is somehow related to government programs serving only to “line the pockets” of government officials. and, finally, (C) Health insurers should have no governmental restraints on them whatsoever. The free market will result in optimal costs and benefits.

Let’s take a look at these. First, the Federal government does not prevent insurers from operating across state lines. It is the states who determine who can sell insurance in their states and what the restrictions on the activities of that insurer can be. So, for the Federal government to “allow” insurers to operate across state lines, they would need to superceed the power and will of the individual states. This kind of action is not something true conservatives usually welcome. What is my source for this?

There are a number, but here is one: a quotation from the online Kaiser Health News (2):

What currently restricts insurers from selling policies outside of their home states?

States have primary regulatory authority over insurance. As a result, insurers are allowed to sell policies only in states where they are licensed to do business. Most insurers obtain licenses in multiple states. States have different laws regulating benefits, consumer protections and financial and solvency requirements.

That’s pretty clear. And one needs only to go to the copyright statement at the bottom of the Anthem Insurance Companies, Inc. website to see that insurers operate in multiple states.

Second, I am not sure how government officials are lining their pockets. They could be accepting large donations from large insurance companies who want favorable treatment from legislators. Certainly this could be a problem. But it is one that is better fixed by changing regulations which determine who can donate how much to legislators campaigns and PACs. (Perhaps take on the results of the Supreme Court’s Citizens United decision?). Further, it would be private corporations not public Medicare and Medicaid money being spent here.

Or perhaps there is an implication that government health programs like Medicare or Medicaid are wasteful. There are statistics about this. For example, according to physician and journalist Elisabeth Rosenthal there is a statistic called the Medical Loss Ratio (MLR). This is a measure of how much an organization spends on health care compared to their total expenditures. She says that in 2010 the medical loss ratio for the Texas Blue Cross-Blue Shield insurers was 64.4. (5)  That means that 64.4% of their expenditures went directly to health care. The remaining 35.6% would have gone to things like employee salaries, marketing, profits and administrative tasks. (6) Not too bad, huh? But Medicare has a medical loss ratio of 98. Yup, 98% of it’s expenditures go directly to health care.

State MLRs prior to the Affordable Care Act (ACA) varied from 55% (North Dakota, Individual markets) to 82% (Minnesota, large group carriers) (7) . the ACA now requires insurance companies providing Medicaid insurance to have a medical loss ratio of at least 80-85. (8)  If the insurer has a MLR lower than, say, the 80% criterion, they are required to rebate customers’ premiums in the amount of the difference. So, a company with an annual MLR of 60 would have to rebate 20% of premiums paid by customers.

It is hard to see how anyone in government is “lining their pockets” with Medicare or Medicaid money.

Finally, there is the issue of regulating the free market to which our avid Tweeter objects. One can find lots of discussion about this between various Economists and other sorts. There are a whole bunch of Nobel Prizes awarded to Economists who wholeheartedly believe that an unregulated economy will run amok and be ruinous for at least most people (see Paul Krugman (9) , Robert Shiller (10) or George Akerlof – all with Nobels in hand and all writing strongly on this issue).

I learned, in an Economics course many years ago, about Adam Smith (you know, the Wealth of Nations guy who published his book in 1776 and is much quoted by the free-marketeers). Smith’s book is kind of the Bible of Capitalism and is the first treatise on free markets – or maybe even on markets. According to Robert Heilbroner, Smith believed that free markets would run amok unless controlled, but that the controlling mechanism would be competition. That makes sense, however, Heilbroner points out that in 1776 there were small markets and small businesses which dealt with difficult travel and communications problems. Our instant global communications, global travel and giant corporations may have changed the game board.  Heilbroner goes on to say “…Smith is generally regarded as a conservative economist, whereas in fact he was more avowedly hostile to the motives of businessmen than are most contemporary liberal economists.” (11)  In addition Smith mistrusted corporations and did not think they would react the way individual people would, and so could not be trusted to make the kinds of decisions that would provide the necessary control on the market. (12)

Elisabeth Rosenthal points out that the recent mergers of corporations to produce bigger and bigger corporations is not conducive to competition. For example, a number of  Blue Cross and Blue Shield companies merged to form Wellpoint which merged with Anthem to make a mega-corporation. These mega-corporations, she says “…don’t translate to lower prices. With their market power, big providers can simply demand more.” (13)

Further, I would point out that health insurance is a pretty price inelastic commodity. That is, for some purchases you are very sensitive to price. Say steaks or Tootsie Rolls or radishes. If the prices on those things go up you will likely find something else to eat – chicken or ice cream or carrots. That is elasticity. Price goes up, purchases go down; prices go down, purchases go up. However, if the price on all food or gas for your car or drinking water goes up, you pay more because these are things you can’t do without (inelastic). In this example, gas for your car is more elastic than food (assuming the price on all foods went up). Health insurance and medical care are in the inelastic group. They are things people need and so companies – especially very large companies – can play fast and loose with cost with impunity unless there are regulations in place.

So back to Trump’s directive to the Republicans to immediately REPEAL, and then REPLACE at a later date! I say, great idea! But here is my truly better idea. Let’s cancel everyone’s health care policy. Across the board. Get rid of them all. No more health insurance for the President, Senators, Congressmen, the Koch brothers, Bill Gates, the grouchy guy who lives next door, your mother. The good guys, the bad guys and the people who think they don’t care. Everyone. And then start from there. Next make a rule that everyone’s insurance comes back online at the same time. No Senators and Koch brothers first stuff. So everyone would need to be insured before anyone could be insured. Oh, and while I fantasize, lets say that whatever insurance was decided on had to apply to everyone. The same policy. Everyone. Imagine what Capitol Hill would look like thirty seconds after that happened!

And lest you think my fantasy is just so much total pie in the sky, Elisabeth Rosenthal reminds us that in the 1940s and early 1950s Blue Cross and Blue Shield were non-profit corporations which accepted “everyone who sought to sign up” and “all members were charged the same rates, no matter how old or how sick.” (14) The goal was insurance for everyone.

What happened? you ask. What happened was the advent of Aetna and Cigna – competing for-profit corporations — “with aggressive marketing and closer ties to business than health care.”

(1) I think the word “lies” is divisive and hard to hear.

(2) Downloaded from http://khn.org/news/health-insurance-across-state-lines/ 6/30/2017.
“KHN is an editorially independent program of the Kaiser Family Foundation, a nonprofit organization based in Menlo Park, Calif., that is dedicated to filling the need for trusted information on national health issues. KHN accepts no advertising and all original content is available to other news organizations and the public free of charge….Neither KHN nor the Kaiser Family Foundation is affiliated with the health insurance company Kaiser Permanente.” (From the KHN website “about us” page).

(5) Rosenthal, Elisabeth (2017) An American Sickness: How Healthcare Became Big Business and How You Can Take It Back. NY: Penguin Press. And, yes, she has a reference for this info. It comes from www.prwatch.org/news/2011/05/10696/blue-cross-blue-shield-getting-richer-corporate-insurers.

(8) Two criterion numbers (80% and 85%) exist because they apply to the insuring of different sizes of groups (Individual, small group and large group)

(11) Heilbroner, Robert (1986) The Worldly Philosophers: The Lives, Times and Ideas of the Great Economic Thinkers, 6th edition, NY: Simon and Schuster, p. 71. Emphasis in the original.